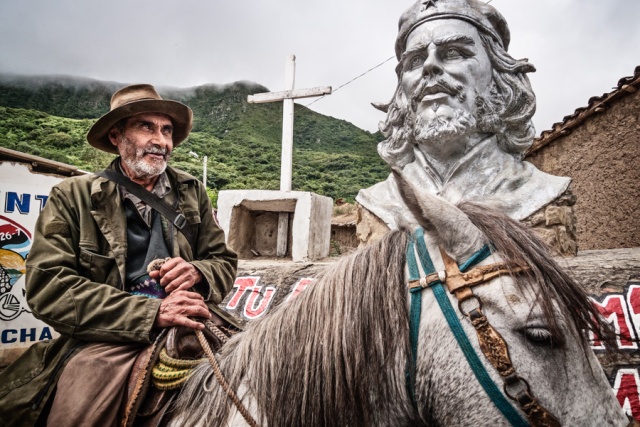 The previously announced photo workshop “On the Tracks of Che Guevara” in Bolivia next autumn will be commencing one week later than originally planned. Unfortunately, we have had to change the dates due to an unforeseen collision of events. The workshop is still going to be an amazing experience, both photographically and as a travel event. Over almost two weeks we will be travelling in the remote mountain areas of eastern Bolivia, visit small villages and learn about the last days of Che Guavara in this area. The workshop runs from September 23th to October 2nd 2019. More information.

A short while ago the new quarterly magazine Photograph issued its second edition. It’s an issue that continues from where the first one set off, both quality and content wise. Photograph issue 2 is full of stunning images and in-depth interviews with profiled photographers such as Martin Bailey, Andy Biggs, and Chris Orwig. The Magazine is in many ways David duChemin’s – a world & humanitarian photographer, as well as best-selling author – realization of a dream of how a photo magazine should look like. As such it’s quite different from other photo magazine, with emphasize on great pictures – and displaying them beautifully in an excellent layout – and little about technique.

As David duChemin writes in this issue’s editorial letter: «We set ourselves a simple goal; to create something beautiful and inspiring, something that didn’t yet exist in this space and would represent strong value.»

It’s an outstanding effort of creating something special from a viewpoint of and by photographers. If I have one objection, it’s still a lack of photography by documentary photographers working with human touch stories. This is foremost a magazine for nature loving photographers, although the portraits by Chris Orwig is extraordinary. Nevertheless it’s absolute a magazine to recommend. Photograph is simply a magazine like no other. It’s digitally published.

A whole new photo magazine has been born. The first issue of Photograph was released about a month ago. It’s not only a new-born magazine; it’s new in many ways. It’s a digital magazine, less about technique and equipment and more about excellent photography and equally excellent photographers. Photography is simple not a traditional magazine, and it’s a treat for any photographer who thinks that it’s not the camera that makes photos, but the man or woman behind it.

As David duChemin, editor and the man behind Photograph, says: «It’s been years since I bought a magazine other than Lenswork, mostly due to the disappointment of spending anywhere from $8 to $16 on something that’s mostly ads, just to get to that one article that’s not about Top Ten Pro Tricks to Focus Your Camera! Hey, there’s nothing wrong with learning to focus. But I’ve got that one (mostly) nailed at this point. So I made a list of the things I myself wanted. I wanted, most of all, photographs. Big, beautiful, un-cropped, and unadorned with lame comments or gigantic pull-quotes. I wanted to hear from the photographers I respected. And I wanted to learn about the things that actually impact my craft and my art, like articles about creativity, composition, and printing.»

The first issue is a wonderful magazine and promises great things for the future. Mainly the emphasis on pictures, the creative process and the showcasing of great photographers hits a home run. It still has some article about technique and camera equipment, which is fine, but it’s really the creative part of photography and the indulging in other colleagues’ brilliant work that makes it stand out. The mix in Photograph is just perfect. If one would wish for something, though, it would be more photography by documentary photographers working with human touch stories. Maybe next issue?

Blue Hour Photo Workshops will continuously announce new photo workshops. Our intent is to offer workshop in fascinating places around the world and with interesting themes. These are the workshops we have planned for the near future:

April 25th to May 2nd 2020
Cuba is a dream for any photographer. Come along on this extraordinary workshop and discover a country full of colours, sensuality and strong cultural roots. The workshops starts out in Havana with its blend of decay, revolution and intense living, then heads out to the picturesque Trinidad, one of the most scenic, colonial cities in Cuba. This 8-day workshop will guarantee to make you come back with a powerful and personal portfolio.

June 5th to 7th 2020
Over a weekend in June in Bergen the documentary photographer Otto von Münchow will focus on how to develop your personal, photography expression. He will talk about the process from vision to final output and how to use the visual language to express your photographic vision. This will be an intense and intimate learning experience.

Sept. 9th to 13th 2020
Come along to beautiful Northern Norway. Bleik has everything a photographer might desire. A strong history and culture, not the least expressed through a visual trait that is recognizable everywhere in the fishing village. In this workshop, we focus on storytelling and the visual language. During the the workshop, each participant will be encouraged to create images that show passion, life, light and content that feels alive.

Oct. 31st to Nov. 7th 2020
A week full of adventures and photography in and around beautiful Granada in Nicaragua, that’s what this photo tour will offer you. We will use Granada as a base and venture out in town and the extraordinary countryside surrounding Granada. Every day the participants will get feedback and guidance so that they can develop their photography and become better photographers. All while experience this beautiful part of the world. Are you ready for the adventure?